So, I’m not really the blog type of person. I’ve never really journaled much but I do have a love of writing. I was that annoying kid in high school that usually got the page requirement, or at least the allowable length of an assignment, increased because I wrote well but had an issue with length. And because my teachers liked me they usually made an exception for me.  So I’ll try to keep it under control but I may, at times, get long winded.

Anyway. This is where I am coming from with this blog. John and I married pretty young by most people’s standard. I was 20, he was 24. We hadn’t known each other long but we were convinced that we were destined to be together and were married in less than a year after meeting. Things were a bit rocky before the wedding but we chalked it up to nerves and were certain things would be better after the honeymoon. We were sorely mistaken. Just two months into our marriage John was laid off from his job as junior designer at his dad’s golf course design company due to the massive nosedive in the economy and the housing market. Something most people don’t know is that when the housing market tanks, so does the golf industry. Golf courses make the majority of their money off the houses they build around the course. So if no one buys houses, no one builds or remodels a golf course. John searched desperately for another job but everyone was on a hiring freeze. Except the military.

We Spent 7 months of Our First Year of Marriage Separated 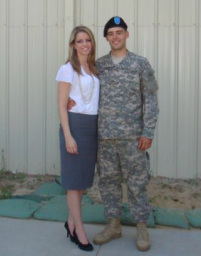 Not even a month later John was shipped off for basic training to become a Parachute Rigger in the Army. It sounds a lot cooler than it really is. Anyway, so we spent just over 7 months of our first year of marraige separated due to John's training. Usually if the training is longer than a certain number of weeks the army will allow the family to move with the soldier right away rather than waiting till their training it done, but John's training was just one week shy of the requirement. I saw him 2 times, a total of 7 days, the entire 7 months he was in training.

As soon as John graduated we made the move from Scottsdale, Arizona to Ft. Bragg, NC. Talk about culture shock. Anyway, we hadn’t found a place to live yet but figured the two weeks the Army gave you in on post accommodations would be sufficient time to find a house or apartment. Again, we were sorely mistaken. We ended up living in a really sketchy hotel for nearly 3 months.

The weather was another major shock. We left Arizona in 90 degree weather without a cloud in the sky. We got to NC and it rained for nearly 2 weeks straight and was dismally overcast for another week after that. I am not exaggerating when I say I didn’t get more than 20minutes sun exposure for the first three weeks we were there. Talk about depressing. Add to that the fact that I have always been close with my family and moving 3000+ miles away was traumatic. I also was very bored and lonely. John was in-processing and adjusting to a new and very demanding job. So he was exhausted by the time he got home everyday and wanted nothing more than to sleep. But I, having been cooped up in the room all day, and having just spent the majority of our first year of marriage apart, was excited to see John and wanted to spend as much time with him as I could…preferably NOT in the hotel room. But John’s energy level continued to drop. And so did our patience for each other. We argued almost non-stop.

During this time we were also trying to find a place to live. We finally decided that buying a house would be cheaper and more advantageous than renting. So we got together with a realtor and started the search. We hadn’t found much to be excited about. We were losing hope, and felt even less excited about this massive life change when our car got broken into. The things that were stolen had value only to us and John took it very hard. Then I unexpectedly became pregnant. We had previously decided to wait to start having children till things had calmed down a bit but due to my ever deepening depression I had been sleeping more and more and was forgetting to take my birth control regularly. We, obviously, were not too thrilled about the timing. Then John got really sick.

He was waking up in the night absolutely soaked with sweat. Even the comforter was soaked through. He would shiver violently for an hour at a time. Then his fever would spike to nearly 104 and he would sleep for hours on end. Yet John refused to see a doctor, till one night he broke out in a rash over most of his body. He was getting dizzy and was barely coherent. I may not be a nurse or a doctor but I knew enough to know he was in really bad shape. I forced him into the car and we drove to the Womack ER. John was delusional and so dehydrated that the first several attempts to give him an IV failed because his veins simply were too dry to get the needle in. The hours dragged by and John was seen by every ER doctor there, and was even checked out by several other doctors and nurses from other wards in the hospital. No one had any idea what was wrong with him. They did hundreds of tests, even testing him for AIDS and syphilis. Everything came back negative. They even put him in isolation and I had to wash my hands before and after leaving his room and wear a mask. I was scared for my unborn child, and terrified that they may not ever get to meet their daddy and I would have to raise this child on my own. Many tears and prayers later, John made a turn for the better and we finally managed to find a nice house. It took a bit of fighting with the doctors but we were able to get John out of the hospital, literally, with just enough time to go straight to the closing with the realtor and lawyer, then immediately go to the house to let the movers in. Then it was off to the store to get things for Thanksgiving dinner the VERY next day. Needless to say, with all the hardship we had been experiencing we had a difficult time feeling terribly thankful that year. 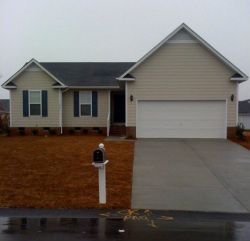 Once we were in the house we felt a ton better. We finally had some room to stretch our legs and John made a slow but steady recovery. As the pregnancy progressed and John got to see and feel our daughter move he got excited to be a daddy. Things were looking up but they were still a struggle. The pregnancy was an easy one but the mood swings were vicious. John bore the brunt of my moody behavior, and not having much experience with pregnant women, other than his sisters, he didn’t really understand what was happening or how to handle it. And honestly, I knew a lot about pregnancy and the changes it brings, but nothing can truly prepare you for how it will effect you personally. Then after Elsa was born I succumbed to post partum depression. I went on medication and started seeing a therapist. Around this same time we also started seeing a marriage therapist. This was the turning point for us.

But, all in all, we had a really rough start. And things pop up all the time that are stressful and can really put a strain on a marriage. However, something John and I are learning as we walk this path together is that nothing is ever easy. And that’s ok!

Just because you were in love when you got married doesn’t mean you will STAY in love after the wedding. Everyone has a honeymoon period in their relationship. This is when you both are just so in love with each other that neither of you can do any wrong. You love everything about each other. But as that fades and the stresses of life catch up to you, you start noticing things that bug you. You start seeing cracks and flaws you never even knew were there. And you start to annoy the hell out of each other. You get to the point where even being in the room with them can make your skin crawl. And this is the point where most couples today call it quits; using the excuse that they just weren’t compatible to get out of the relationship without feeling like either of them was really to blame. But I say that in a marriage, you both are equally responsible for BECOMING compatible. If things are getting difficult you both have to decide to love your spouse and to do something daily, preferably multiple times a day, to show your spouse that you love them. You have to be willing to make compromises, and sometimes sacrifices in order to maintain harmony in the relationship. This isn’t easy. It is not for the faint of heart or weak stomached. Marriage is tough. Its messy. It’s certainly not the fairytale that Hollywood would have us believe in. Sure it might start out that way but you have to work at it to keep that love going.  It is because of these lessons I have learned, and am still learning, from these first few, tumultuous years of marriage that I would like to share with my fellow wives, young mothers, or even those of you who have been married for years, how you can learn to be happy in the imperfect marriage.  Cuz lets face it, nothing is perfect. Not you, not your situation, and certainly not your husband. So let’s relax and LEARN to have fun with it!